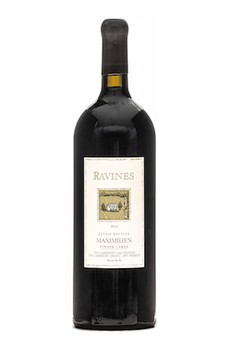 “The 2015 Maximilien is a Bordeaux blend, mostly Cabernet Sauvignon, with 18% Cabernet Franc and 17% Merlot, aged for 16 months in an 80/20 mixture of French and American oak. Per the winery's often-seen aging regimen, the first nine months in wood were in mostly well-used barrels, meaning a mix of new to fourth use; the last seven months were in all neutral wood. It comes in at 13% alcohol.

In this vintage, said Morton Hallgren, the wines had good ripeness—not as much as 2016, but good. This does well; it's a little lean, structured and reasonably concentrated. The wood adds a touch of vanilla now, but that fades quickly. The finish is excellent. For a cool-climate blend, this succeeds on many levels and has some old-school finesse. Don't expect fat and sweet, of course—that's not the Finger Lakes. It will be better in 2021 or so and will age well. It is a nice value in a well-constructed food wine.” -MS, 6/28/19

“The bright and ripe cassis nose with just a hint of smoky wood, draws you into the elegant, mid-weight palate, where the fine-grained tannins carry the finish quite some distance. A blend of 60 per cent cabernet sauvignon, 28 per cent merlot and 12 per cent cabernet franc. Drink or hold.” 10/30/18